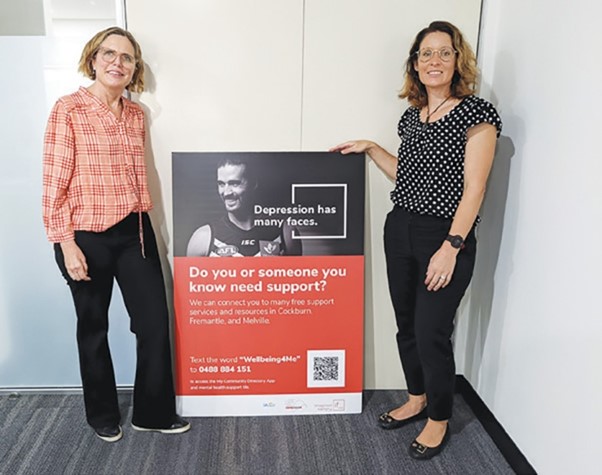 Leigh Sinclair and Suellen Althaus are spearheading the Action Against Depression campaign.

A NEW campaign aimed at tackling the stigma attached to depression will be targeted at Fremantle, Cockburn and Melville.

The Action Against Depression campaign is being spearheaded by Imagined Futures, a partnership of government, business, philanthropist and community service providers.

The strategy is based on a model developed in Europe which was credited with reducing suicidal behaviour in Nuremberg by 24 per cent.

It’s focus is on primary care and community intervention, access to care and treatment, de-stigmatization of mental health issues and raising awareness of suicide prevention and depression.

“We’re conscious that there’s a lot of strain on the mental health system at the moment and it’s a long waitlist to see mental health professionals,” Ms Sinclair says.

As part of the campaign, Imagined Futures will link people  of all ages with free or low-cost services.

The services will work to assist people who might be on a waitlist to see a mental health professional, and range from crisis help to online, phone and face-to-face providers.

“It helps to teach people to recognise the signs of poor mental health and then know how to support someone who’s struggling.”

According to Beyond Blue, 17 per cent of Australians aged 16 to 85 have experienced depression or anxiety in the past 12 months, while data from the Australian Institute of Health and Welfare reports 3139 people died by suicide in 2020.

Ms Sinclair says the community response has been positive so far.

“We’ve got a whole lot of students engaged and distributing posters, and they’ve got such an incredible reception across Fremantle, Cockburn and Melville.”

Curtin University social work student Jay Anderson has been working with the campaign for the past three months.

“We wanted to reach out in places where you can have the most impact. We advocated for the campaign in bars, cafes and restaurants, sporting clubs and across social media,” Mr Anderson said. “I was surprised at how many people had a genuine interest in the campaign. It goes to show how people are affected by mental health, directly or indirectly.

Ms Sinclair says: “It’s rare for someone not to say ‘yes’ to putting some posters up, it just shows how committed people are to this issue. Every family has some mental health history somewhere.”